INDIA’S FIRST TRAINED ART CURATOR, DR ALKA RAGHUVANSHI, ADDRESSES THE ISSUE OF “DWINDLING FOLK PERFORMING ARTS” IN AN INTERNATIONAL WEBINAR ORGANIZED BY ST ALOYSIUS COLLEGE AUTONOMOUS, MANGALORE
The Department of Sociology, St Aloysius College (Autonomous), Mangalore, under the aegis of STRIDE (Scheme for Trans-Disciplinary Research for India’s Developing Economy), organized an international webinar on the theme “Dwindling Folk Performing Arts” on 12th August 2020. Dr Alka Raghuvanshi who is India’s first trained art curator, having trained at the Goldsmiths College, London and the Museum of Modern Art in Oxford, was the speaker of the day. With a writing career of on the arts spanning nearly 40 years, she has authored and edited over 32 books on the perform. A senior columnist and author, she has been on the Editorial Teams of the Indian Express, The Times of India, Pioneer and The BBC, where she consistently wrote to cover the entire spectrum of the Arts. 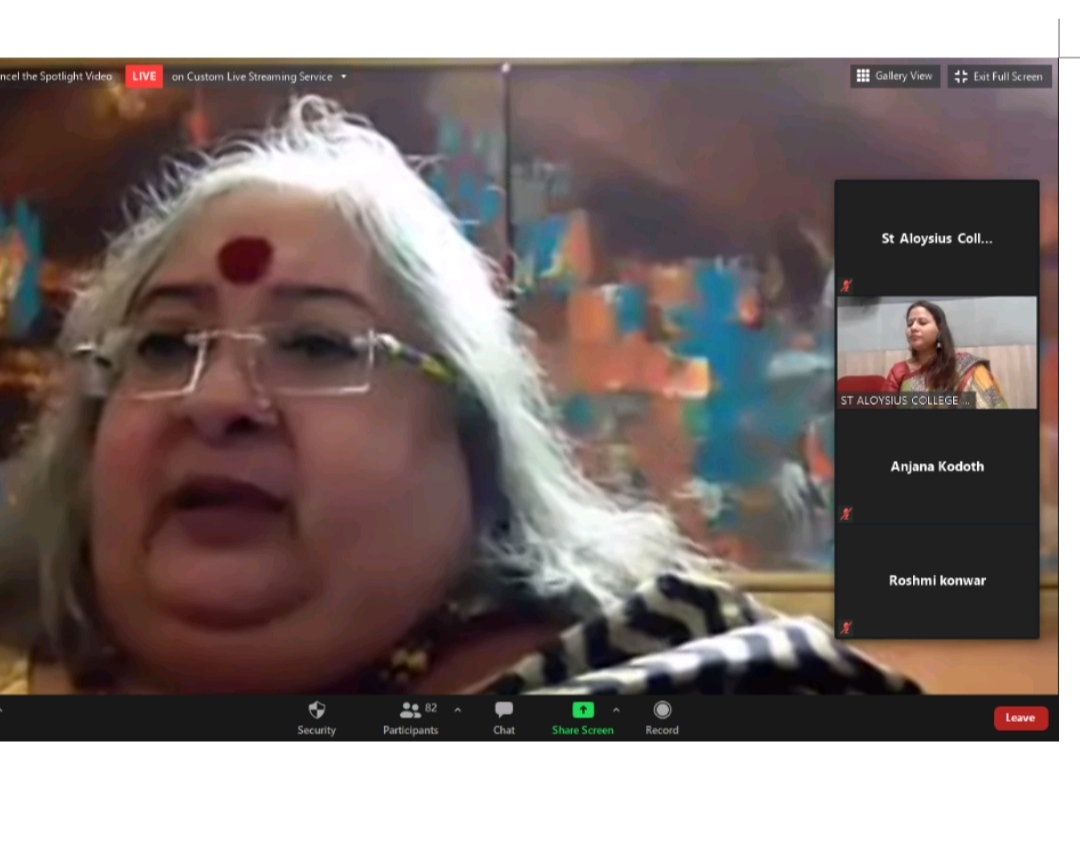 The webinar began with a welcome note from the Convener and HOD, Department of Sociology, Ms Joan Rita O’Brien. The Webinar rightfully coincided with Krishna Janmashtami and started with the convener talking about Lord Krishna (also known as Natwar or a performing artist) who symbolises theatre and love in various forms:
“Kabhi razamandi toh kabhi bagavat he ishq
Mohabat radha ki he toh meera ki ibadat he ishq”
To set the tempo of the webinar a short video with about 12 dwindling folk performing arts was showcased and presented to the participants. Following which Dr Alwyn D’Sa, the Chief Coordinator of STRIDE and the Controller of Examinations, St Aloysius College (Autonomous), Mangalore, gave a brief introduction about STRIDE and what it aims to achieve. Rev. Fr. Dr Praveen Martis, SJ, Principal of St Aloysius College (Autonomous) Mangalore, delivered his opening remarks on the webinar where he shared his concern about the dying forms of folk theatre and art. He also mentioned that St Aloysius College Autonomous, Mangalore felt the need to talk about the “dwindling folk performing arts in India” and do its part in the preservation and promotion of an essential and rich aspect of the Indian tradition and culture before it’s too late and transforms from the state of “dwindling” to “extinction”.
The speaker started her talk with her memories and experiences about Yakshagana of Karnataka talking about both dance and drama in the same breath. Being perturbed by the tragedy of Indian theatre and dance and drama, she spoke about the origin of folk theatres and its connection to Mahabharat and Ramayan. She almost gave a visual detailing of the puppet performance of Yakshagana (Gombeyatta) and how it is exhibited to a smaller seated audience given the size of the puppets; making a mention that India is the only country in the world where all the four forms of puppetry still exist (shadow puppets, String puppets, rod puppets and the hand puppets). Dr Alka mentioned how she was involved in the government’s literacy mission work and how she reached out to people of several parts of the country (14 states) through folk performers. Folk performance was used in a very unique way to spread the message of literacy, hygiene, health, environment etc. as it is a useful tool to reach out to a large group of people.
At the same time she spoke of the dwindling number of Ram Lilas in the north and her memories as a child. With other forms of entertainment taking over, folk theatre is getting marginalised. Even the TV performance or a live recording of theatre could never capture the real magic of the live performance. Earlier being invited to portray a character in Ram Lila would be considered a big privilege and the person performing it would be worshipped for those ten days as if they were actually the incarnations of Lord Ram/Sita etc.
The Ram Lila of Benaras and its changing venues every day and the role of the king of Benaras are unique. It is still held in Benaras and there is an audience; there are performances and she emphasized that we need to make them survive, viable and help in their sustenance. Also the Ram Lila of Kullu Manali and the “Long horn” that is played by the villagers who are not necessarily performers is again a spectacular performance.
Dr Alka Raghuvanshi explained the Ram Lila of Gujarat and Rajasthan where it is performed with ghoomar and dandia and here the goddess Amba is worshipped which is more dance related than theatre. Bhavai of Gujarat has a large repertoire of drama though.
Swang (folk theatre) in Haryana and parts of Punjab can at times get frightening because they are basically under disguise and take on various forms and she shared one of her real life experience. Women were not really part of the discourse at all. It was men who took up the female characters (stree vesham) like in almost all the parts of country. Even the musicians and singers were men. It’s only in the past 40 years that women have been allowed to perform their roles.
The Bhand Pather of Kashmir is another form of folk performance which is more music oriented and it is the tumbak nadi, a percussion instrument which is used.
Dr Alka made a special mention of a remarkable performer and artist Teejan Bai who was a one woman army show with just one instrument (ek taara). Someone who could keep the audience glued to the performance of just a single woman performing the entire Mahabharata.
She spoke of how the North East has lost many forms of indigenous theatre forever for many reasons (one of it being insurgency), yet they have beautiful troupes who do amazing performances and they compete. Surprisingly the erstwhile king used to also compete in the same.
She also mentioned about how the use of the head gear sets Indian folk performance apart. Every region has its own head gears and also the make up or shringaar (which has evolved tremendously over the years) similar to the head gear is unique to each folk form.
Dr Raghuvanshi concluded with how some folk dances have been also intelligently and with a lot of hard work transformed and evolved into classical dance forms by Guru Kelucharan Mohapatra (Odissi) and Pt. Birju Maharaj (Kathak).
The last part of the webinar was an interactive session with questions (moderated by Ms Joan Rita O’Brien) for Dr Alka Raghuvanshi from participants from Nagaland, Uttar Pradesh, Karnataka, Kerala, Manipur, West Bengal, Jharkhand etc. and she answered them all with her experience, research and expertise with complete detailing.
The Webinar ended with a vote of thanks proposed by the convener and HOD, Department of Sociology, Ms Joan Rita O’Brien.