The St. Aloysius College (Autonomous), Mangaluru organised the National Colloquium titled “National Education Policy 2020” under the UGC-Paramarsh Scheme to enable a better coherence of the policy. The Colloquium was held on Wednesday 26th August 2020 from 2.00 p.m. to 4.00 p.m. 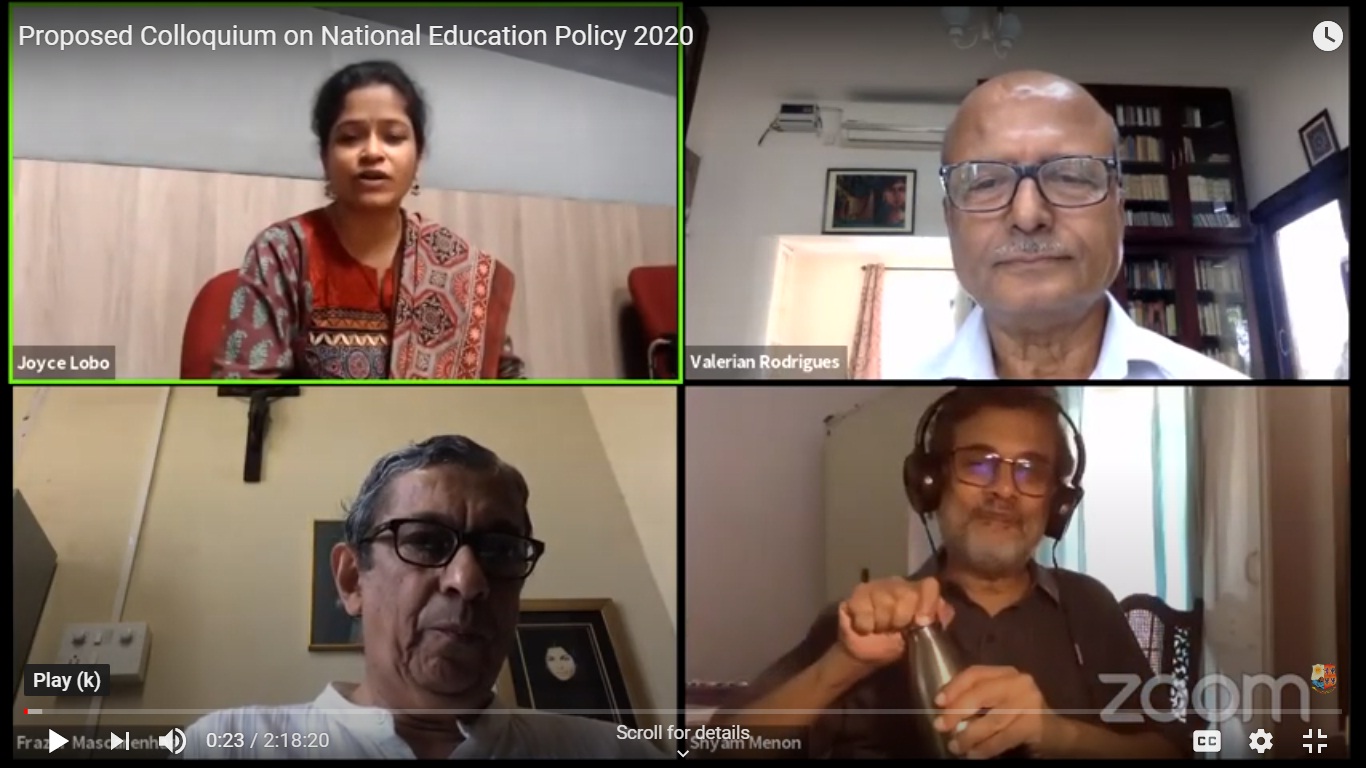 The New Education Policy (NEP), 2020, charts one of the most far reaching agenda to restructure educational curriculum across India from early childhood to higher education. Undoubtedly, there is much wanting in the curriculum available to an average student in India today, across the various stages of schooling and higher education. NEP promises a comprehensive corrective design: recommends reordering school education from the existing 10+2 pattern into 5+3+3+4, to cover 3-18 years old; imparting school education in local languages’ turning Higher Educational Institutions (HEI) into multidisciplinary universities; and use of appropriate technological tools at all levels of education. 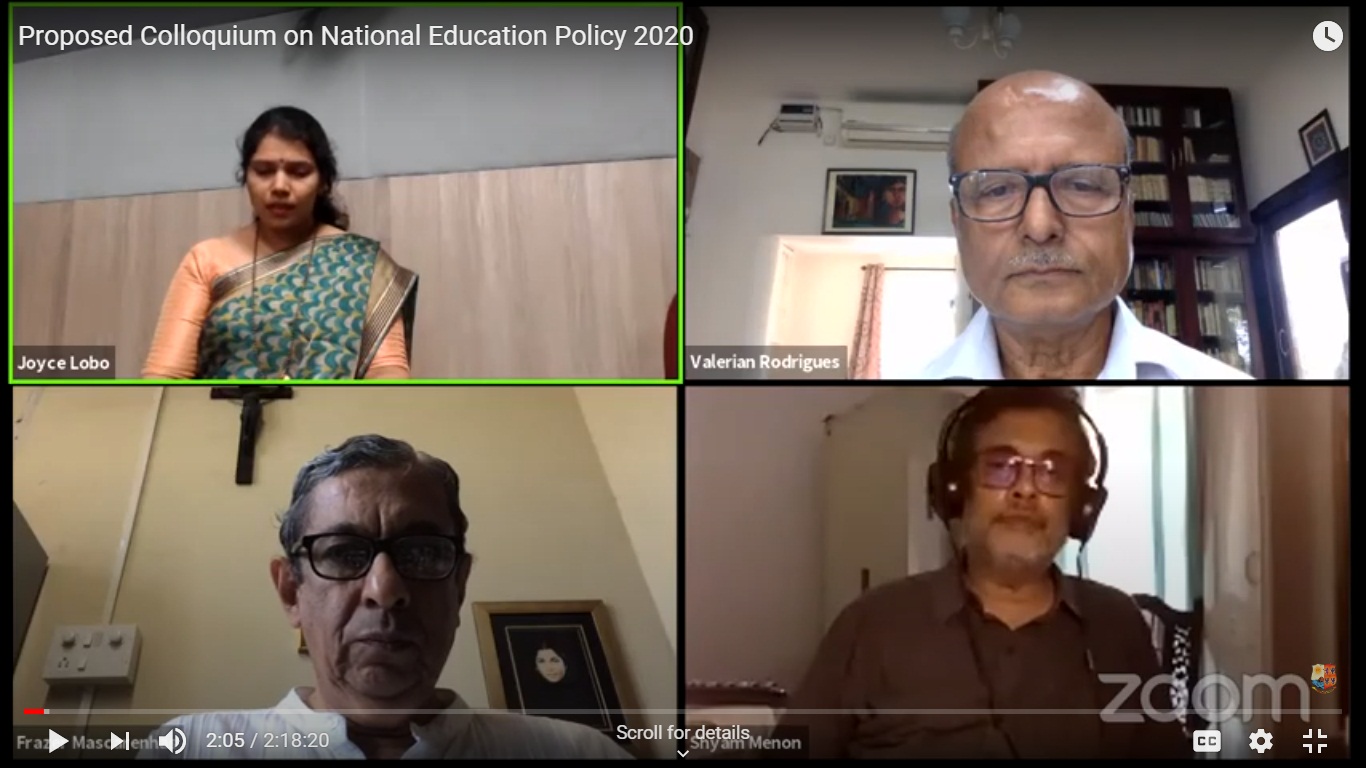 In this context, the panel discussion focused on the following four domains that inform this document:
1.    The substantive recommendations of the NEP, 2020
2.    The omissions, silences and detours that inform NEP, 2020
3.    The prior conceptual and moralistic assumptions replete in NEP, 2020 and their consequences.
4.    Problems in the execution and implementation of NEP, 2020. 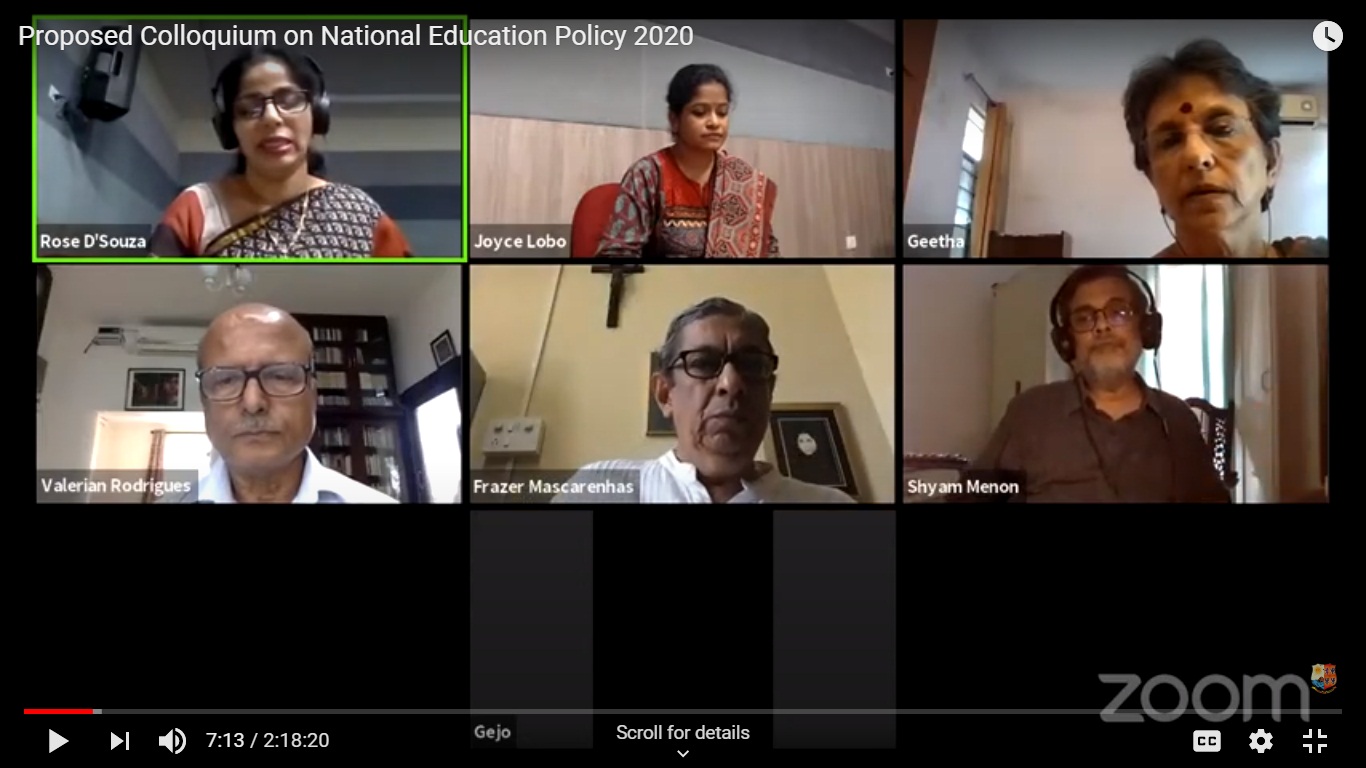 The panelists spoke on different angles of NEP 2020.
Professor Valerian Rodrigues (Former professor and Dean of the Faculty of Arts, Mangalore University and former professor at Jawaharlal Nehru University, New Delhi) spoke on the theme “The NEP 2020: A Critical Overview”. He gave an overview of the NEP 2020 while drawing its positives and negatives of the document by examining the four components of the policy such a, i) the goals and principles of NEP; ii) Charter for school iii) recommendations iv) the support regime. He pointed out to the excellent critique given on the existing school curriculum while the policy rightly stresses on the need to impart education in the mother tongue, on teaching Sanskrit, etc. The policy reflected innovative and imaginative solutions as against rote learning. Pointing to the negatives, Prof. Rodrigues argued that the document should have been foregrounded on the Preamble of India’s constitution as the leading principled stance. Second he questioned as to where is the social capital to carry out the design suggested by NEP? Third he called NEP 2020 as an Archimedean design wherein there was the lack of  political consensus.

Professor Shyam Menon, (Professor at the Central Institute of Education, University of Delhi since 1994 and the Founding Vice Chancellor of the Ambedkar University Delhi, during 2008-2018) addressed on “NEP- Questioning the seriousness of Purpose”. His lecture dealt with two parts: the policy being an attempt to resurrect from the bureaucratic debris and second, the undermining of federalism in India. The attempt appeared more of a political project of denying history and producing everything on a blank state. Given the fact that federalism in India was accepted to accommodate diversities, this document attempted to introduce centralization, standardization and uniformity. Rather the ownership of the state is missing through NEP 2020 though education appears constitutionally as a subject within the Concurrent List. The fact that the document deviated from the earlies policies on education laid in the bypassing of the Indian Parliament.

Prof. Geetha B. Nambissan, (former Professor of Sociology of Education at the Zakir Husain Centre for Educational Studies (ZHCES), Jawaharlal Nehru University, New Delhi) spoke on “NEP- Right to Education of Children from the Marginal Groups in relation to Social justice”. She on the onset stated that a policy of any country is a process. The earlier two policies on education were framed by the nation-state. The current policy has the undertone of globalization and corporatism. She understood that the corporate sector’s provision of education was in the interest of the public and for private profit which was okay. She asserted that the private can be the new public. However, she cautioned that that the quality of education particularly for the underprivileged groups, including those who send their children to low priced English medium schools where quality is worse than government schools, lacks the true conceptualization of equality of learning in this document. There is a need to draw attention to advocacy and research before implementation.

Dr Frazer Mascarenhas SJ, (Principal of St. Xavier’s College, Mumbai and member of Working Group for Undergraduate Education of the National Knowledge Commission, 2006) spoke exclusively from the context of rights of both linguistic and religious minorities under the topic, “NEP and The Concerns of Minorities”. While highlighting some of the best words from the document viz., innovation, adaption to change, all-round development of capabilities, role of teachers, etc. he noted the total dismantling of the earlier system was not conducive. He argued that institutions particularly the minority institutions were at the forefront of providing the best education as proven by the government cum private institutional rankings. He criticized the formation of the policy that did not find a member from the minority community particularly from the Christian community while many of the colleges belonging to the latter group appeared in top performance ranks. The document saw the complete absence of references to the marginalized, minority rights and the emphasis on a constitutional value like secularism. He posed an important question: given the present composition of the Supreme Court judges, will the basic structure of India’s constitution get altered? NEP is hence ultra vires of the Constitution in spirit.

Professor A. R Vasavi, (Social Anthropologist, is based in Karnataka) addressed the theme, “Impact of NEP on the rural children and communities”. She reiterated the positives of the NEP 2020 document viz., the need for early childhood care, recognition of nutrition including the introduction of free breakfasts along with mid-day meals, etc. while pointing to the political aspirations of those who have a specific agenda. The policy overlooked the rural complexities that included migration and the displacement of population; the poor quality of education; etc. The policy would find the enhancement of an, already, hierarchical society. The fact that the inputs from different voices of the Indian society particularly the rural were not taken into consideration mocks at the realization of democracy and failed to address the structural deficit. The children in a village go to different schools rather discourages the forging of shared  interests at the community level.

The programme was presided over by Rev Dr Praveen Martis SJ, Principal of St. Aloysius College (Autonomous), Mangaluru along with the Convenor of the Colloquium Dr Rose Veera D Souza, Dean of Faculty of Arts and HOD, Political Science who moderated the colloquium. The entire program was overseen by the Program Coordinator, Mr. Alwin D’Souza, in assistance with Mrs. Maria Shaila D’Souza Asst Profs. from the Dept of Political Science. Dr. Joyce S. Lobo anchored the colloquium. The colloquium saw the raising of pertinent questions on secularism, decentralization, school dropouts, triple language, diverse culture and inter-state differences, minority rights etc.