The Department of Social Work, St Aloysius College (Autonomous), Mangaluru organised a National Level Seminar ‘Metanoia’ on ‘Across the Cis Tide: Trans-Community and the Role of Social Work’ on 24th June 2022 at Eric Mathias Hall of the College 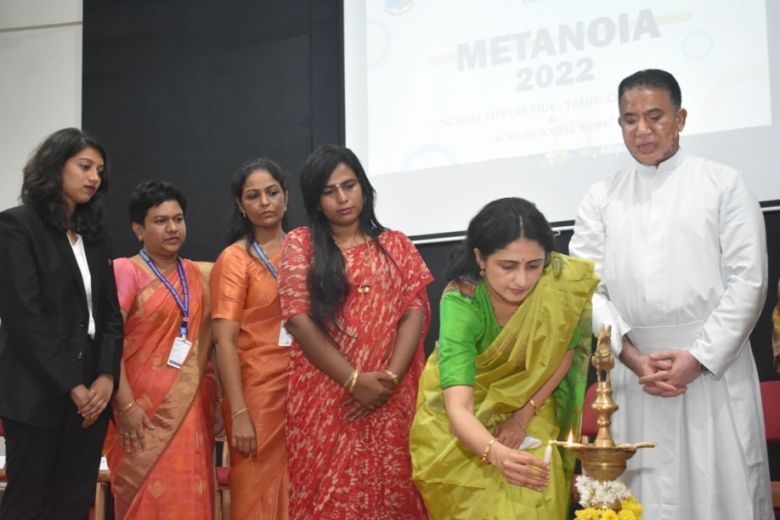 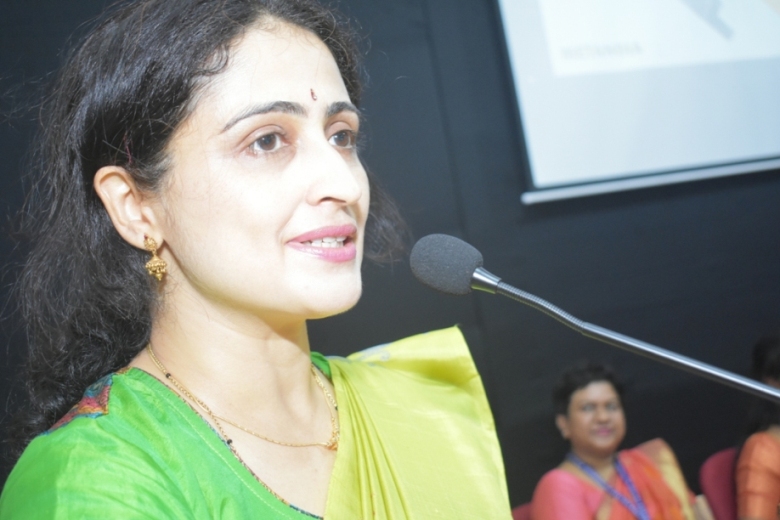 Dr Supriya Hegde in her inaugural address spoke on the issues of trans-gender community and the pain and trauma they are going through. This community has a lot of inhibitions to open-up themselves. They born with normal condition and became transgender at their teenage which is unconditional. This is hard to accept by their family members due to the disrespect they receive from their peers. 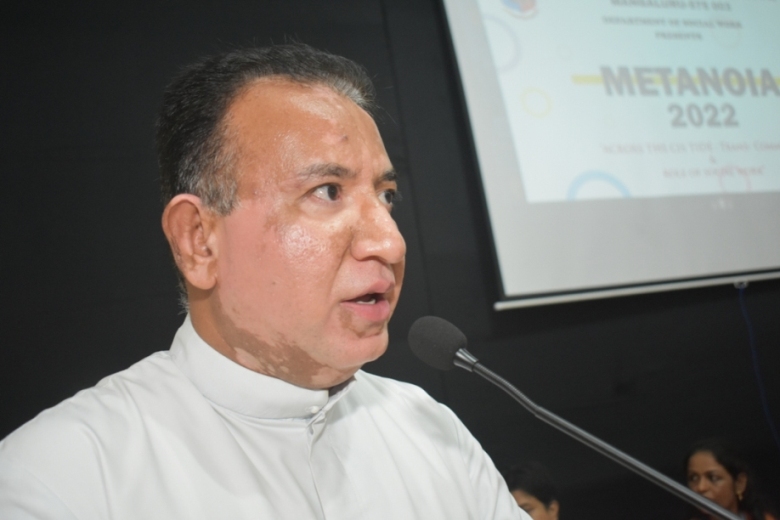 Rev. Dr Praveen Martis in his address shared his experience at St Joseph’s College, Bengaluru on an experiment he and some of the students conducted during his tenure at St Joseph’s College, Bengaluru which included making the faculty dress up as transgenders and arrive to the college and this turned out to be disastrous due to the assumptions and comments we make in our daily life. He highlighted the importance of not reducing human beings to just fit into one label or the other, accept everyone as they are and how small efforts in terms of education and sensitization within our circles and outside can help in building an inclusive society. 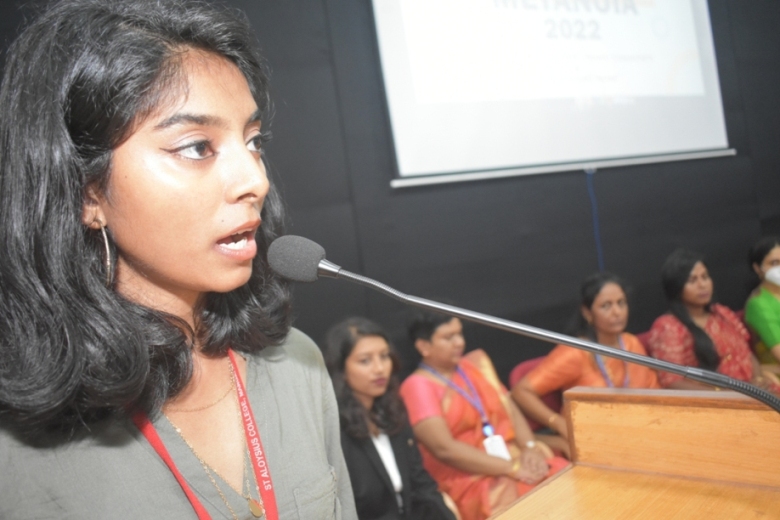 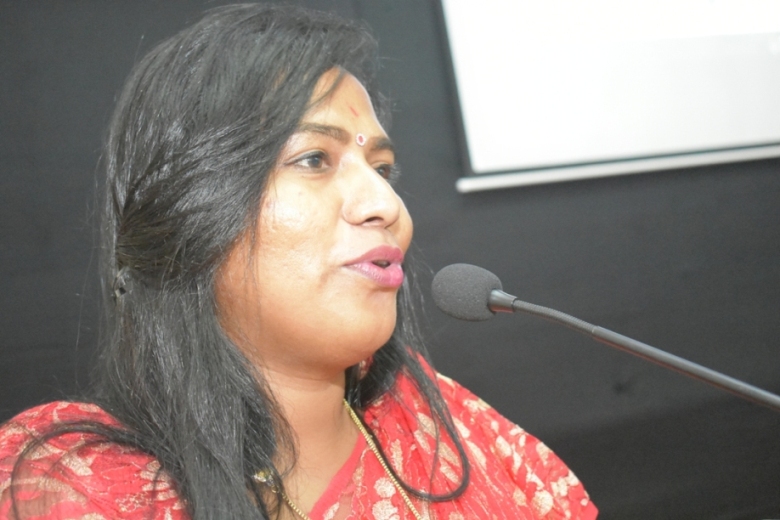 There were 3 sessions during the programme. The first session was conducted by Ms. Arundathi G. Heggade. She spoke on the topic “Transphobia and Rights of the Transgender Individuals”. She started off the discussion with a little introduction about herself and the backstory. She was born as a male and eventually began showing female attributes as she was growing up. She later became a transwoman. She gave us an insight into the various incidents she had to experience or face as a transwoman. She was raped by a passenger for begging at the traffic signal. The public representatives sent the transwoman to jail. Later, as a result of  her continuous efforts as a part of the community, she was respected by her own family. She tried to commit suicide twice in her life. She spoke about the difference between sex and gender and also gave us further details about the ‘Hijra’ culture. She further stated that there are also fake Mangalamuki’s which eventually takes away the respect that the community actually deserves. 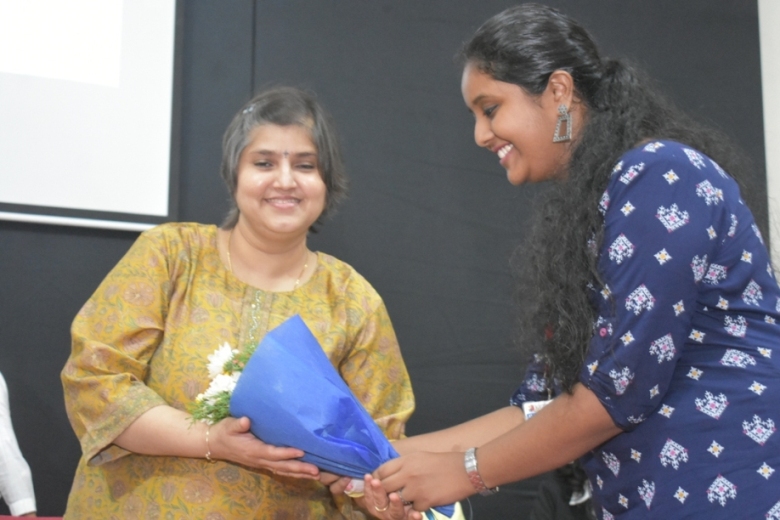 Ms.Hemangi Mhaprolkar was the resource person for the second session. She spoke on the topic “Role of Social Work in the Life of Sexual Minorities. She began her session with a quick activity which included all of us having to speak for about 3 minutes as our opposite genders. She then questioned about how we expect people to live like this daily when we can barely do it for 3 whole minutes. She gave a brief introduction about some of the basic topics such as Gender, Sex and Sexuality. She then “spoke about various terms such as Gender expression and Gender behaviour which was an eye opening session to many of us who didn’t know the complete meaning of the same. She went on to talk about homosexuality and how homosexuals often face mental issues because of the derogatory treatment they receive and how they also constitute a major part of the minorities. Her next subtopic for the day was about the LGBTQIA+ COMMUNITY.

This was followed by a brief introduction of the all the communities that come under this umbrella which included the Lesbians, Gays, Transgenders, Queer, Intersex and Asexual people. She then displayed a slide of what showed the MSM circle and spoke about how this circle encompassed of the entire community of sexual minorities. On the right side, we had the hijra construct and on the left was all the others who identified as sexual minorities. She brought her focus to the transgender community and spoke about how the hijra construct was a phenomena only seen in India and neighboring countries, the Gharana system, about how the transgender community has to fight for acceptance today only because the visibility is miniscule, how the transitions can happen both ways (male to female and female to male) and both need to be given equal recognition and respect. Lastly, she spoke about the role of social work in the life of the sexual minorities, the Humsafar Trust, changing the discriminatory behavior against transgenders and using basic tools such as speaking, allying with the community, authority and advocacy as a social worker to work for the cause. 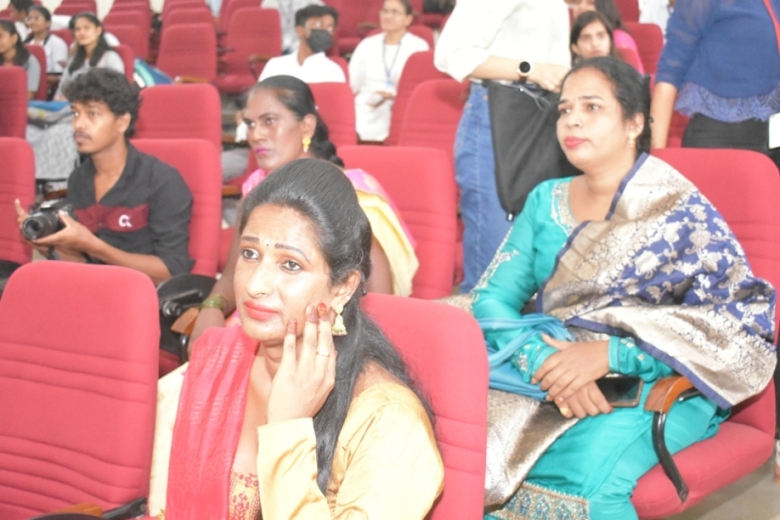 The third session was conducted by RJ KAJAL. She spoke on the topic “Life Perspective of a Transgender Individual”. She was born a boy, began thinking about whether she was different after the age of 6 when she figured that she likes to dance, wear sarees and dress up like women. She was humiliated by many of her brother’s friends who called her chakka, hijra and many such derogatory terms. She saw a transgender woman in her village for the first time and there was a general assumption among people that transgenders used to take children and make them change genders. She highlighted how the social constructs like religion and caste don’t matter in the transgender community, how she became a woman and was eventually accepted by her own family but not the society. She worked at Humsafar Trust in Mumbai, likes to dance and later became a Radio Jockey at Radio Sarang.  She spoke about how we need to have more books and information about transgenders especially for the younger generations which will educate them and sensitize them towards the community. She called out the lack of job opportunities for them and how they are offered jobs only in paper but they are never implemented.

Some of the members of the transgender community who has graced us with their presence gave dance performances. This was followed by a Poster Making Competition where different groups came forward and presented a poster relevant to the theme.

The valedictory ceremony was graced by Dr. Laveena Lobo, Director of Maffei Block, Mr. Alwyn D’Sa, Registrar, Dr Ratan Mohunta and Dr. Rose Veera DSouza. They spoke on the Awareness and Sensitization about the transgender community, breaking myths everyday as a part of Metanoia, Importance of gender studies, Kindness and how we should learn to love each other. Prizes were distributed to the winners of the poster making competitions.