National Webinar on "Western Ghats: Past, Present and Future"

The Department of Political Science at St. Aloysius College (Autonomous) Mangaluru organised a national webinar titled, "Western Ghats: Past, Present and Future" 28 October 2021 through Zoom platform. The talk was delivered by Prof. (Dr) Madhav Dhananjaya Gadgil, Indian ecologist, academic, writer, columnist and the founder of the Centre for Ecological Sciences, former member of the Scientific Advisory Council to the Prime Minister of India and the Head of the Western Ghats Ecology Expert Panel (WGEEP) of 2010 (Gadgil Commission). He is the recipient of the Padma Shri (1981) and the Padma Bhushan (2006).

Prof Gadgil postured the theme through its historical past that gives lead to the present plight of the Western Ghats. He highlighted the sustainable nature of Indian communities before the advent of the British in India which he exemplified with the works Goan “gaonkaris”, Adivasis, etc. However, the British took over village community lands using the device of the Forest Department (FD) in the name of conservation. Hence, most of the influence on India’s wildlife policy and Wildlife Act comes from the colonial institutions such as Bombay Natural History Society (BNHS). The development that took place since India’s independence in the form of dams and reservoirs that ironically were referred to as ‘temples’ of modern India. In fact they devasted not only the wilderness and forests  but also a large number of marginalised people without due compensation. Here development has not gone in sync with the interests and wants of the native people.

Prof Gadgil gave an example of the communities residing in Mangaon who have protected the sacred groves in the Velhe taluka of Pune. These communities have understood the ecosystem services of the grove and have taken the sole responsibility of protecting it instead of relying on third parties. Through the West Coast Paper Mills of Dandeli he explained the consequences of state misappropriation and misuse of bamboo resources especially on river Kali. Through the unreported case of the Bharatpur National Park he pointed to the need for community based eco system living. Hence through these examples he proved the fact that the Forest Department and the Wildlife Protection Act have been unable to protect and their activities have been counterproductive to these ecosystems.

Through this talk Prof Gadgil highlighted the role of people’s participation, the need for ecosystem community living, the destruction that is wrecked on areas of Maharashtra and Kerala. He cautioned that with the destruction of the ecosystems as found in the Western Ghats, probably many villagers will turn into migrant labourers or construction workers whose lives will be more uncertain. 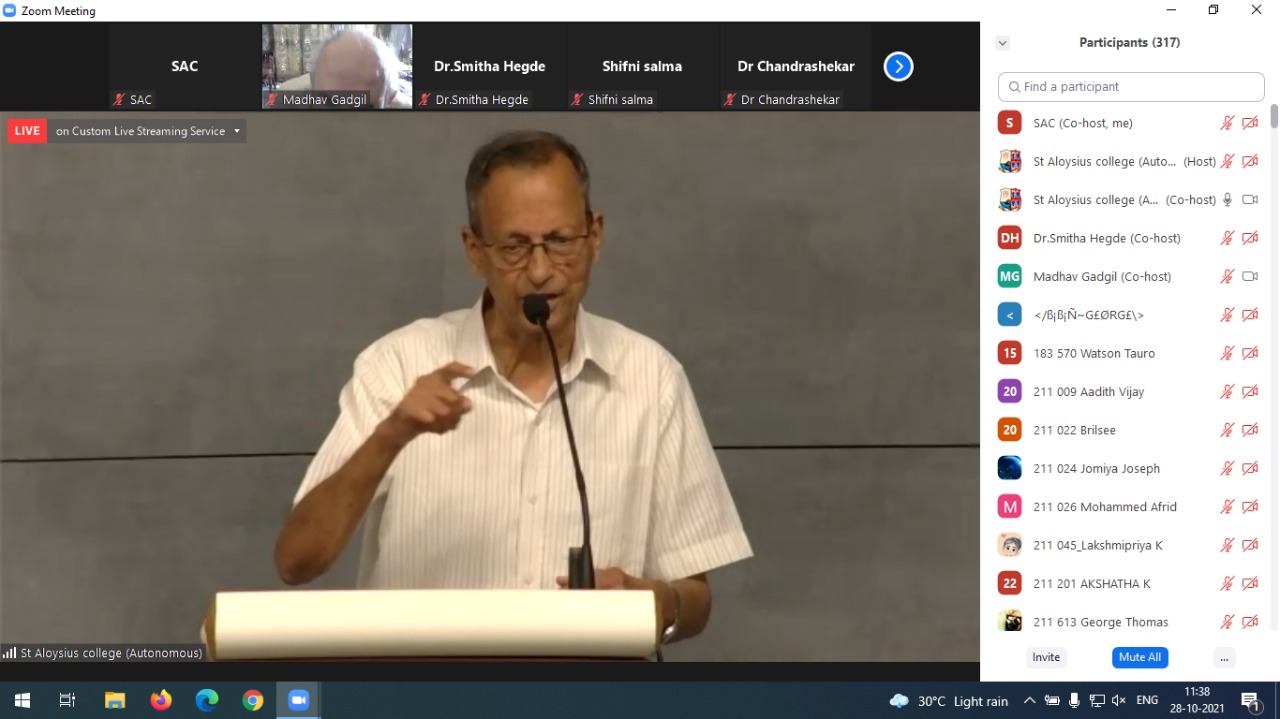 Rev Fr Leo D’Souza SJ in his comments to the talk appreciated and admired the fact that Prof Gadgil’s work emanates from field experience. The latter’s focus on the destruction of the Western Ghats beginning with the advent of the British cannot be the sole reason. Rather he questioned as to “what we are doing” in the present; policies of our governments are no different. 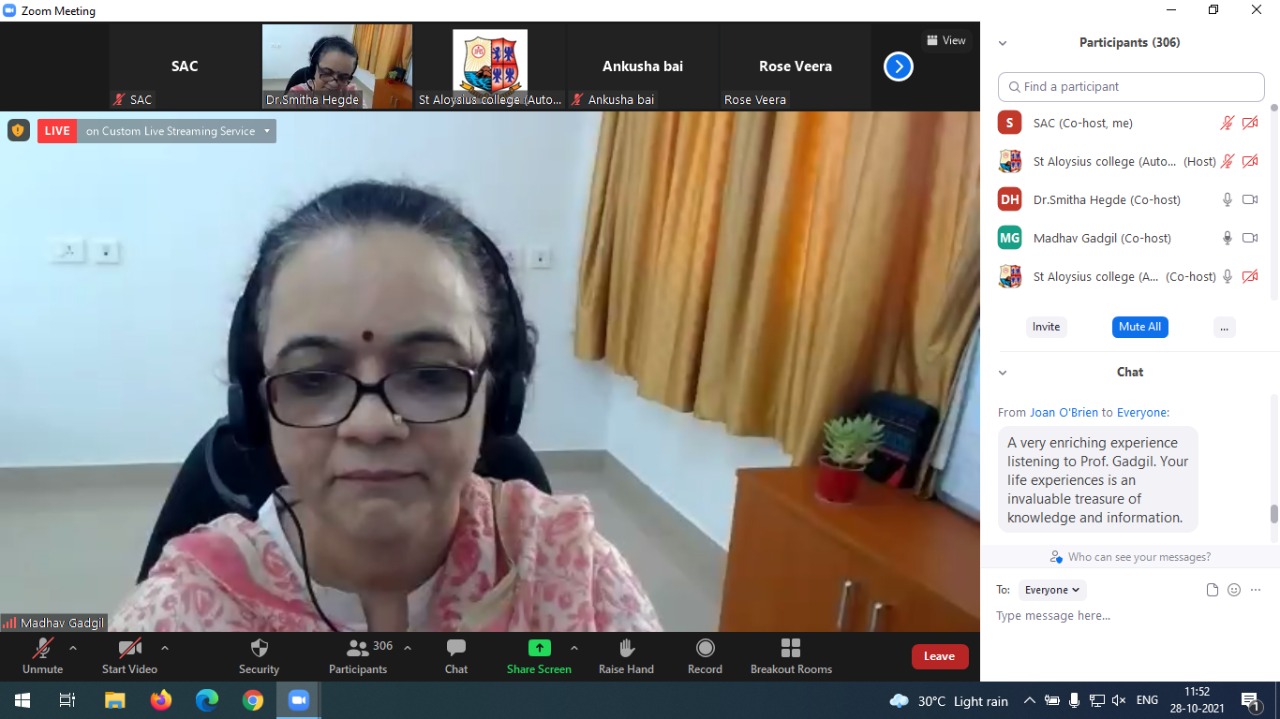 The session was moderated by Dr Smitha Hegde, Plant biotechnologist, an expert in ferns of the Western Ghats, Professor & Deputy Director at NITTE University, Center for Science Education & Research. She most articulately summarised the talk and conducted the Q&A session.

The Western Ghats is a global biodiversity hotspot whose soil and wate sustains the livelihoods of millions of people. The Sustainable Development Goals (SDGs) of the UN proposes the protection of such regions for ecological balance, which is the need of the hour. The department of Political Science, St Aloysius College (Autonomous) Mangaluru attempted to bring to the fore these issues through this webinar.

The webinar began with an invocation by Fr Marcel Rodrigues SJ, HOD Journalism and his team.  Dr Rose Veera Dsouza Dean of Faculty of Arts and HOD Political Science welcomed the gathering and introduced the distinguished guests. The webinar concluded with a vote of thanks by Dr. Joyce Sabina Lobo.