“It is one of the most pervasive violations of human rights in the world, one of the least prosecuted crimes, and one of the greatest threats to lasting peace and development.”  The students, faculty and Management of St Aloysius College (Autonomous) under the leadership of Women’s Forum, CASH (Committee Against Sexual Harassment) and Human Rights Cell organised the Candle Light March procession to the DC’s office on Friday 13th December 2019 to voice their dissent on the recent crimes against women and children and vulnerable and expressed their solidarity with the victims.

A Panel Discussion was held between 4to 5pm at the college campus at the Mother Theresa Peace Park to mark the day. “We've gathered here as a disturbed audience to bring out our discontent and voice our concerns against the violation of human rights that appears to have become a routine matter in our country if we don’t take care.” Voiced the young faculty and students of the college in the panel discussion. 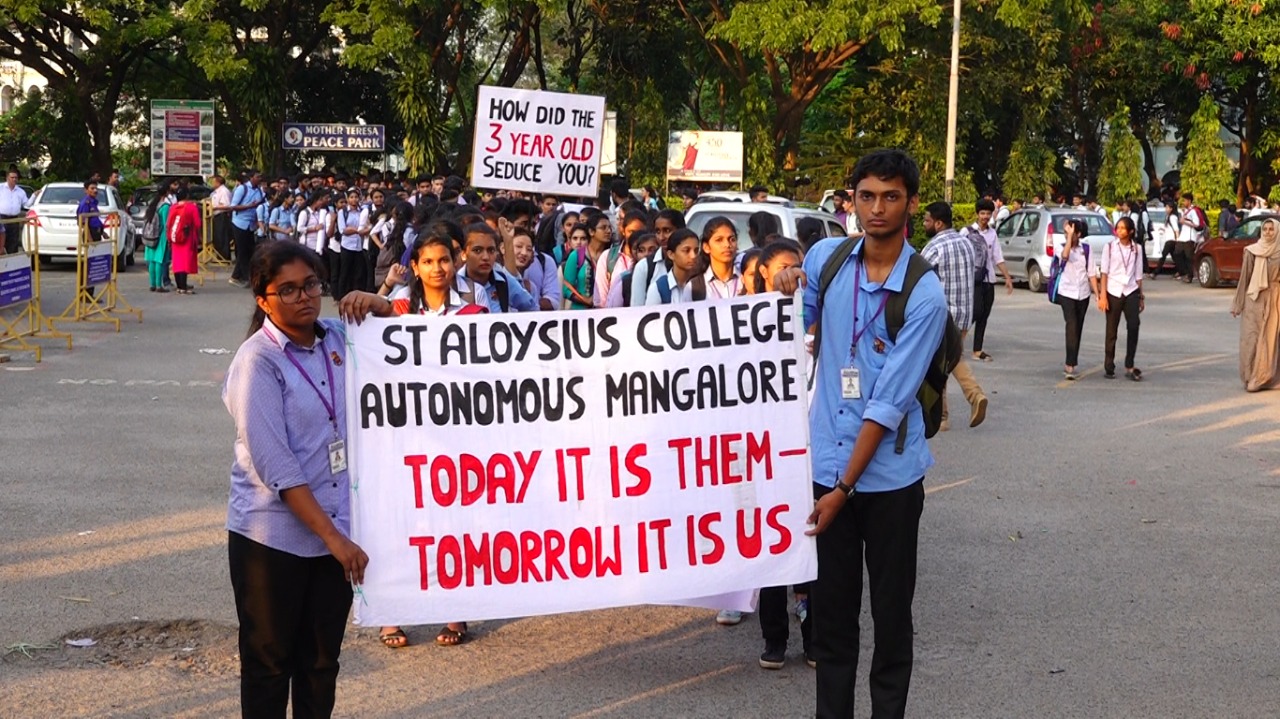 Ms. Neeti Shetty from the Department of English and Mr. Alwin D Souza from the Department of Political Science were the faculty panellists who questioned the attitude of silence among the people. Harshitha and Aparna from BA, Adarsh from BSc, Sahil from BCA and Kushubu from BVoc participated as student panelists. The panellists discussed the atrocities against women since the incident of Banvari devi in Rajastan and the struggle that led to Vishaka guidelines and later Sexual Harassment of women at workplace (Prevention, Prohibition and Redressal Act 2013). Students also brought to discussion  Puttur case of dalit rape and IPC – Scheduled Caste Scheduled Tribe Prevention of Atrocities Act & IT Act, Encounter death, role of civil society, Nirbhaya case etc.

Rector, Rev. Fr. Dionysius Vas SJ appealed to the students to have culture of diversity in the campus and appreciated the culture of multi languages that the students employ while conducting sports day on the previous day. Principal, Rev. Dr.

Fr Praveen Martis SJ appreciated the move to improve social responsibility through the March.
Moderator Ms Vineetha, Registrar, School of Social work appreciated the efforts of the students and impressed the young students to believe doing something to promote change. Dr Shalini Aiyappa delivered vote of thanks. Cleophas and group led the invocation to God. “ I think we can all agree that the time for complacency is long gone, has passed and belongs to another era. The silence on violence against women and children has been broken and now, now is the time for stronger action.” Said Joeana Cera, III BA while compeering the programme. 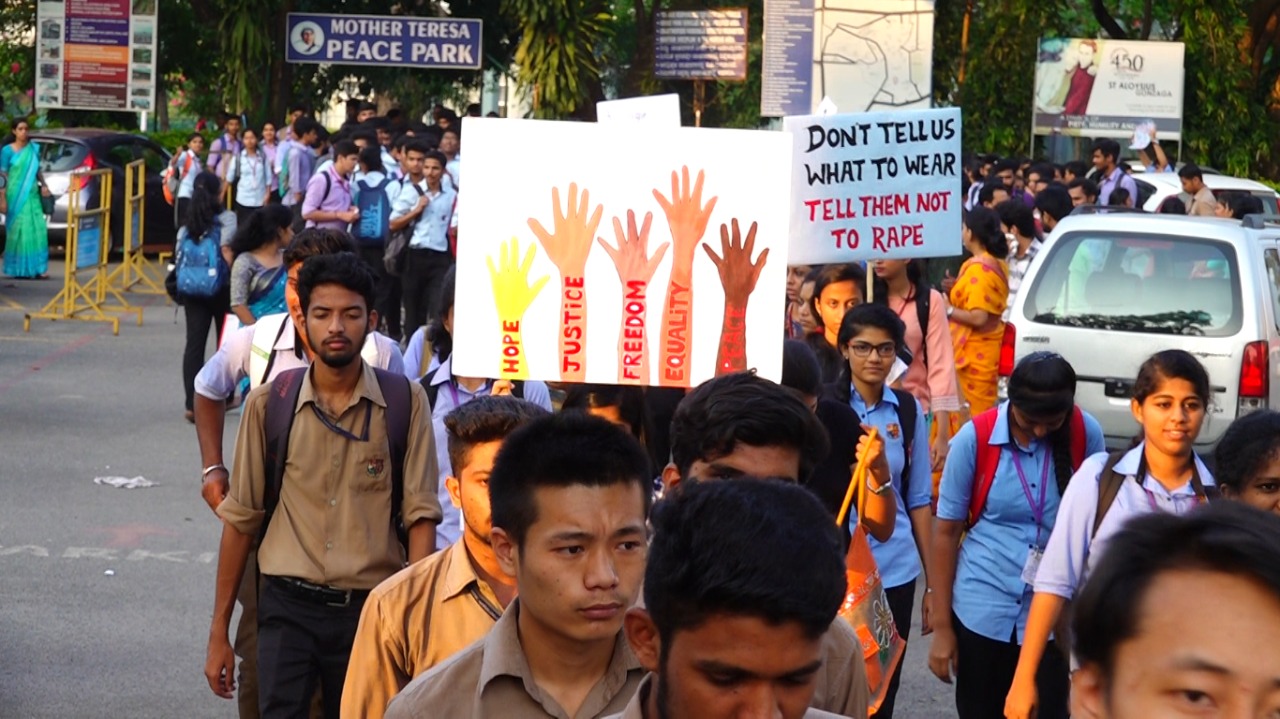 Dr. Saraswathi, Coordinator of the Women's forum and Dr Shalini Aiyappa, co-ordinator CASH and Dr Rose Veera D Souza of the Human Rights programme were the convenors of the programme.
Marching in silence peacefully, holding placards around 1000 students proceeded to the DC’s Office in procession and displayed a street play to promote an awareness for a secure society for men and women.  Few NGO ‘s of Mangalore were present and expressed their solidarity for the cause.

“It's high time we as students of a premiere institution of Mangalore raise our voices against the atrocities and horrific incidents taking place against women and the vulnerable. We all know that we have a lot to do. We have to do much more to end these horrible abuses and the impunity that allows these human rights violations to continue -was the crux of the peaceful march. Upon reaching DC;s office students displayed a street play. Dr Sarawati and Dr Dinesh Nayak who guided the street play expressed their views. Jyoti chelyar from the NGO spoke about the need to change our culture of silence to claim justice.Dr Dinesh thanked the DC Ms Sindhu B Rupesh IAS and DR P S Harsha Police Commssioner of Mangaluru and Police of Pandeshwar and Bunder Police station for the support.

After the street play The Rector, Principal, faculty and Student Council members along with the convenors proceeded to the DC ;s office and handed over the memorandum to be submitted to the Chief Minister through the DC. The DC received the memorandum. The co-ordinators thanked the DC for the co-operation.

Prof. Naveen Mascarenhas and the Student Council President, Lloyd Vineeth   guided the students in the march.