The members of the ‘1971 GOLDEN BATCH’ of St Aloysius College have donated Advanced Instrumentation Center consisting of machines and equipment to aid Research studies to its alma mater by raising a sum of Rs One Crore and 71 Lakh as a token of gratitude. This is a unique gesture witnessed for the first time in the history of the College. This Advanced Instrumentation Center has come at the right time when St Aloysius College is all set to become a Deemed to be University in the near future. 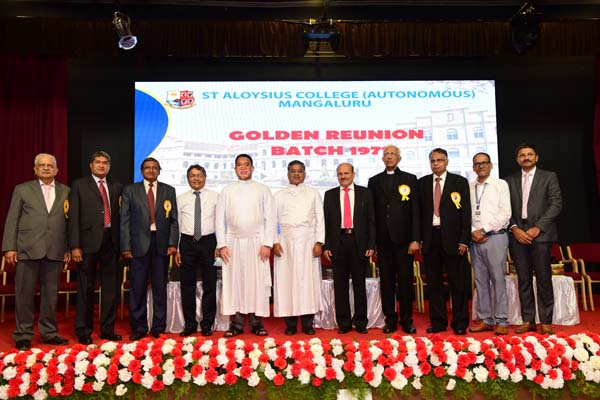 The alumni of the College are celebrating their Golden Jubilee Reunion and graduation by presenting such a gift to their Alma mater. 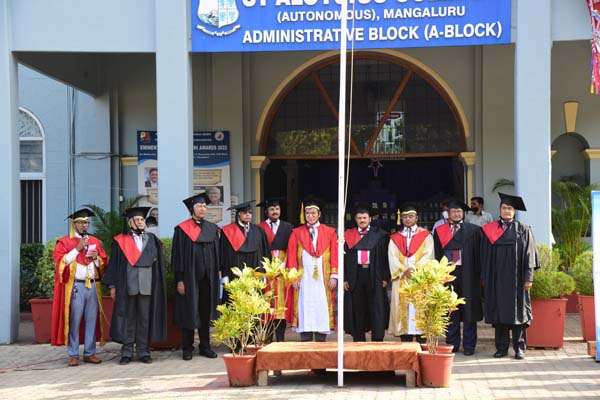 The programme began with a solemn commendation ceremony which is a replica of the Convocation ceremony for graduating students. Each one from the 1971 golden batch was given a stole and memento by the college management and conferred with a commendation certificate acknowledging their role as ambassadors of their Alma mater and for having lived in full the motto of the college by being men and women for and with others. All these batchmates of 1971 batch now in their 70s were happy to be attired in the Convocation gowns and caps since they never had the opportunity to be attired in gowns and caps when they graduated. 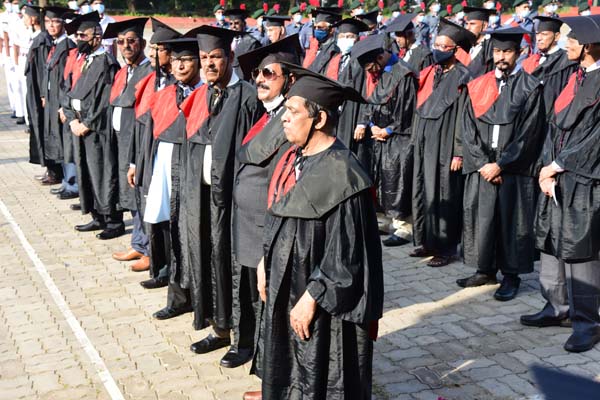 The programme began with the welcome dance by Sanvita and team while Reuben Machado and team invoked God’s blessings. Walter D’Souza delivered the welcome address, where he thanked his batchmates for their generosity and supporting their Alma mater.

Walter further said, “It’s nice to note that 50 years after we graduated from this prestigious institution, we have all joined to give back to our Alma mater. 10 January 2022 will go down memory lane as a remarkable day in the history of St Aloysius College where batchmates of the College have made a unique contribution to the college. Even though 268 passed out from the 1971 batch, we were able to track 157 of our batchmates, while 50 plus had passed away. We got support from European countries, the USA, Gulf, India and other places, and nearly 40 of our batch-mates from abroad and India who had already booked their tickets to join the occasion by flight/train had to cancel them due to the pandemic restrictions. We all alumni of the Golden Batch are proud and beaming with pride that we gave back something to our Alma mater, who made us what we are now”. 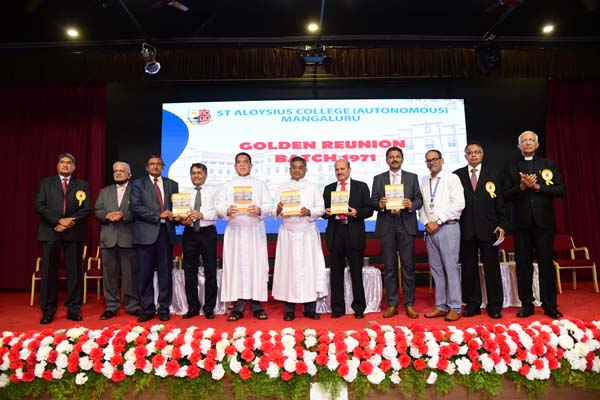 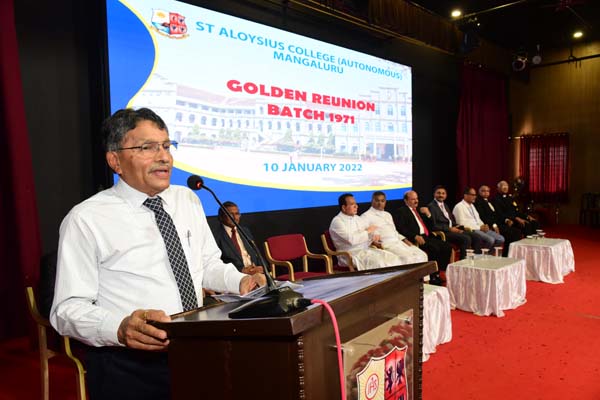 M V Nair, who is the non-executive chairman of the trans union CIBIL, and a proud alumnus and one of the recipients distinguished eminent Aloysian Alumni Awardees 2022 delivered the keynote address and said, “I want to share two topics: 1) Aloysian contribution to the Community, and 2) Aloysius as My Dream. In my life, NCC had played an important role, and what I am today is because of my involvement in NCC at St Aloysius College, which made me reach greater heights. I learned how to make friends and influence people. Remember that a smile or pat on the back makes a difference. Networking is also important in life. When I was admitted to a hospital I learnt that in giving you also receive. Since then I made a strong decision that I should make a contribution to my Alma mater from the part of my income, and I continue to do so. I chose banking because a banker can make a big contribution”. 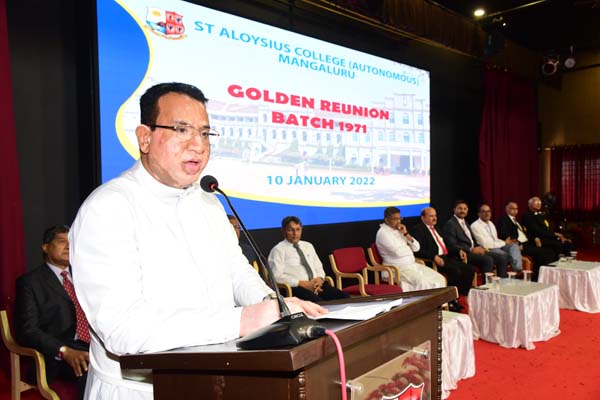 Addressing the gathering, Rev Dr Praveen Martis SJ said, “Every reunion is that time of the year to reunite, reminisce, celebrate and a nostalgic trip down memory lane. But this reunion is going to be unforgettable as the GOLDEN BATCH OF 1971 has made it special with several projects for its Alma mater as it is on the threshold of becoming a university and strides with gusto into its 143rd year of its glorious existence. They have not only planned a celebration of coming together but, more importantly, they have come up with a generous thought of securing and ensuring excellence in Research and innovation by putting in place one of the best Advanced Instrumentation Centres in their beloved Alma mater. On this auspicious occasion, I would like to thank this Golden Batch for their generous gift”. 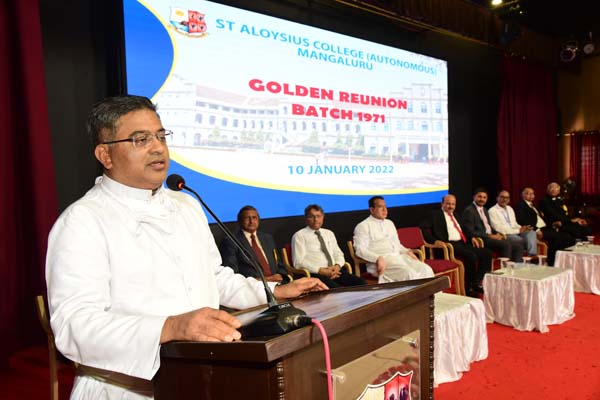 Rector Fr Melwin Pinto SJ in his presidential address said, “1971 batch is an inspiration for other alumni to follow and give back to their Alma mater. If this golden batch could do it, why not the other alumni? With support and encouragement from our alumni, we can take our institution to greater heights and earn name and fame in the country and abroad. 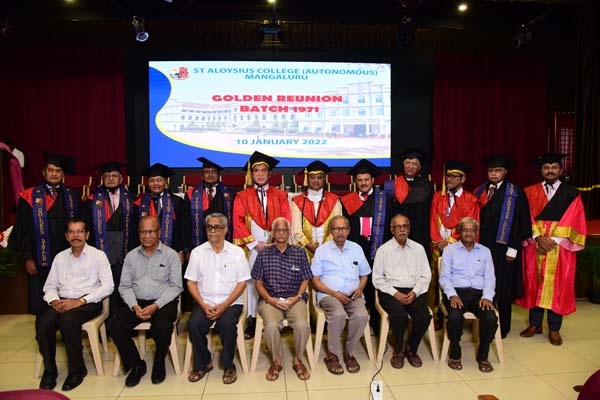 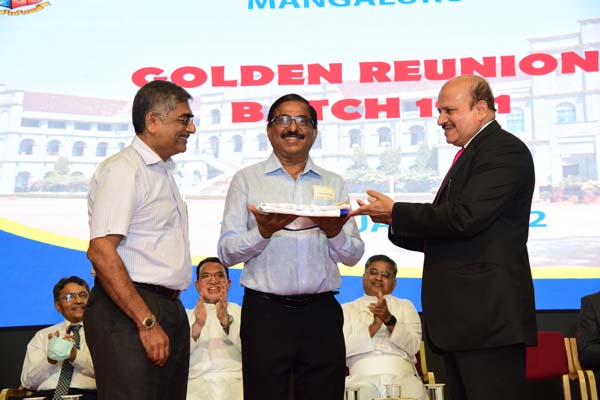 To mark and relive this tradition the batch of 1971, their flag was handed over to their next batch by Walter D’Souza, the chairman of the 1971 golden batch to Archibald Menezes, the chairman of batch-1972. 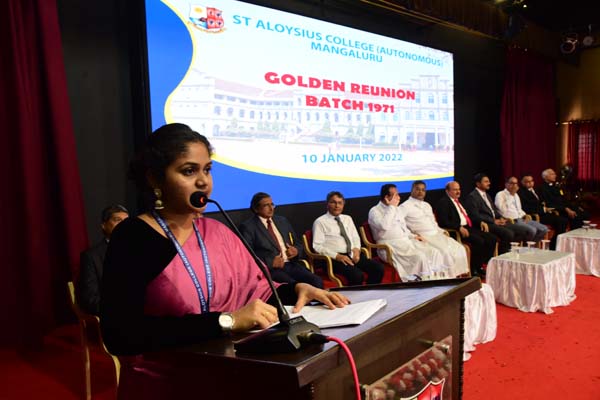 The programme was meticulously compered by Ms Alita D’sa, a faculty in dept of English, St Aloysius College. Prof Edmund Frank, the Secretary, delivered the vote of thanks.